Strategy from the Stone Age up to the future 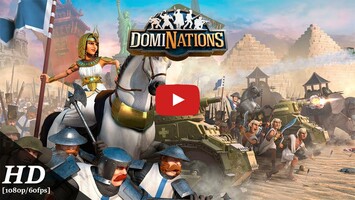 Advertisement
DomiNations is a strategy game where players control a civilization from its beginnings up to the space race. Sounds similar to what you'd find in Civilization? It's not. In fact, this title is strongly inspired by Clash of Clans.

As in all games of this sort, in DomiNations players can build their town however they want – houses, mills, mines, warehouses, barracks, watchtowers, and so on. The most important part, as always, is the town hall, which you'll have to protect from enemy attacks at all costs.

In the barracks, you can train and recruit new soldiers, who will not just defend the town but also attack enemy civilizations. To do so, just pick your opponent and deploy your units, and they'll do the rest.

A relatively new element in DomiNations is that every so often – and provided you already have the needed resources – you can advance your civilization's technology. You'll be able to see these changes both in the buildings and in the overall look of your city.

DomiNations is an interesting strategy game that, even if it doesn't bring anything innovative to the genre, does introduce some fun elements within the Clash of Clans-style formula.
Reviewed by Andrés López Translated by Robert Zant

Why is this app published on Uptodown?
(More information)

where is the new updat

A good game, with many details that differentiate bases. You need to have a good strategy. But with many mistakes. Missing information on which version you have installed. To update you need to uninst...

Are you updated. Please Bobby'snCanvas
MiniCraft: Blocky Craft
Create your own block world and have an adventure
Golf Clash
Quick and fun golf matches
Bingo Blitz
The most entertaining way to play bingo
Extreme Car Driving Simulator
Take your car to the limit in a realistic environment
Remixed Pixel Dungeon
A new and improved version of Pixel Dungeon
Akinator the Genie FREE
The genie Akinator guesses which character you are thinking of
Baby Panda: Care for animals
Help Baby Panda look after the animals